Anatomy of the Eye

Your eyes not only help you see, but also reflect your personality and uniqueness as a human being, owing to which they are important and need to be taken care of well. Proper eye care requires a basic understanding of eye anatomy and how the eye actually helps you see. 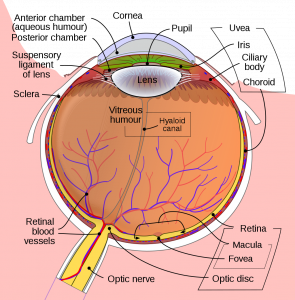 How Do Our Eyes See?

You see when rays of light enter your eye through its pupil. Important parts of the eye such as the pupil, the cornea, and the iris direct rays of light toward the lens, which refracts those rays toward the retina, a part that is located at the very back of the eye.

The retina comprises a number of special cells called cones and rods, which collaborate to convert the image into an electrical message, which is moved to the retina’s optic disk and then sent to the brain through the optic nerve. The brain then deciphers the electrical message sent, resulting in “seeing.”

To understand the process of seeing better, you need to study the eye part by part.

The iris is the colored part of the eye, located right in front of the lens. It has an opening at the centre called the pupil through which rays of light enter the eye. It is the job of the iris to see that too much light doesn’t enter the eye.

As previously mentioned, the pupil is the opening at the centre of the iris through which rays of light pass. The iris and the pupil work together in the sense that the iris controls the widening and narrowing of the pupil to allow the entry of sufficient light.

The transparent round part of the eyeball, located right in its front, is called the cornea. Its function is to receive light rays entering through the pupil, refract them, and focus them on the retina.

The lens, which is located behind the pupil, is placed in a thin and transparent case. It works with the cornea to refract light rays that enter the eye and focus them on the retina.

The choroid is located between the sclera and the retina. It comprises a pigment that absorbs excessive light to enhance clarity of vision. The choroid is connected to the iris through the ciliary body.

The retina is the innermost and most photosensitive part of the eye, which is located at its back. It comprises innumerable cells called rods and cones, which help people to see in dim as well as bright light. The cones can also help the viewer identify various colors.

The yellow spot at the centre of the retina is called the macula, which comprises the largest number of cones.

The centre of the macula is called the fovea, which is rich in cones. The brain deciphers the portion of the image that is focused on the fovea the most accurately.

The optic disk can be seen by ophthalmologists while conducting a comprehensive eye exam on the patient. It is not only the point at which the optic nerve originates, but also the point of origin of the electrical messages delivered to the brain via the optic nerve. The medical world calls it the “blind spot.”

The optic nerve originates at the optic disk and carries visual messages from the retina to the brain.

The tough white visible portion of the eye is the sclera and its function is to protect the sensitive inner parts of the eye.

Rods and cones are the photo sensitive cells that the retina comprises. The normal human retina comprises 125 million rods and 6 – 7 million cones. While the rods help people see objects in the dark, the cones are essential for seeing in bright light. Since cones also help viewers identify colors, it is believed that there are 3 varieties of cones, each sensitive to the primary colors red, green, and blue.

Understanding eye anatomy enables us to not only understand our eyes better, but also appreciate the wonderful way in which these small organs serve us. Our eyes deserve to be examined periodically to ensure that everything is fine with them.